Fiber cable is fast becoming a practical solution for many cabling projects due to its low cost and reliable connectivity. Once the decision to go down the fiber route has been made, another needs to be made on whether to use singlemode or multimode. Each has its own place within the right applications, neither one more superior to the other. Knowing the differences can prevent you from investing in the wrong type of cable or using a cable that isn't compatible with your optical fiber devices, which can negatively impact the signal.

This article will take you through the differences when comparing the two modes of fiber, helping you to make the best choice for your fiber cable system.

All fibers consist of three main components including:

Both multimode & singlemode fibers are 125 microns in outside diameter - a micron is one-millionth of a meter and 125 microns is 0.005 inches - a bit larger than the typical human hair.

But that's where the similarities end. Let's take a look at each individually:

Multimode fiber has light travelling in the core in many rays (or modes), hence the name multimode. This means that light can propogate through the fiber in many different ray paths. It's core is five to six times larger in diameter than singlemode, which allows for more greater light-gathering capacity. Core diameters range from 50 micrometers (µm) to 1,000 µm and is typically used for communication over shorter distances, such as within a building or on a campus. Typical multimode links have data rates of 10 Mbit/s to 10 Gbit/s over link lengths of up to 600 meters - more than sufficient for the majority of premises applications. 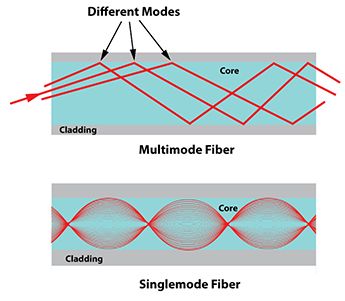 Within the multimode category, another important distinction is between two types - step index and graded index profile. The simpler and older type is a step index fiber, where the index of refraction (the ability of a material to bend light) is the same all across the core of the fiber. This leads to rays of light being propagated. With all these different ray paths or modes of propagation, different rays travel different distances and take different amounts of time to transit the length of a fiber. This being the case, if a short pulse of light is injected into a fiber, the various rays emanating from that pulse will arrive at the other end of the fiber at different times. The output pulse will be of longer duration than the input pulse. This phenomenon is called "modal dispersion" (pulse spreading). It limits the number of pulses per second that can be transmitted down a fiber and still be recognizable as separate pulses at the other end. Therefore, this limits the bit rate or bandwidth of a multimode fiber. For step index fibers, wherein no effort is made to compensate for modal dispersion, the bandwidth is typically 20 to 30 MHz over a length of one kilometer of fiber expressed as "MHz-km".

In the case of a graded index multimode fiber, the index of refraction across the core is gradually changed from a maximum at the center to a minimum near the edges, hence the name graded index. This design takes advantage of the phenomenon that light travels faster in a low-index-of-refraction material than in a high-index material. The light rays or modes of propagation that travel near the edges of the core travel faster for a longer distance, thereby transiting the fiber in approximately the same time as the "low-order modes", or rays traveling more slowly near the center of the core. 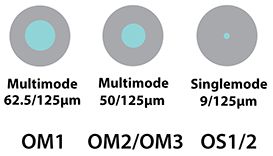 Another common graded index multimode fiber in use today is the 50/125 which is often referred to as "laser rated" fiber for it's higher bandwidth capacity. 50/125 comes in 2 types - OM2 and OM3 and now also OM4; whereas 62.5 micron is classified as OM1. 'OM' stands for 'Optical Mode'.

Singlemode fiber has a much smaller core, only about 9 microns, so that the light travels in only one ray. In single-mode fibers, all the multimode effects described above are eliminated; however, one pulse-spreading mechanism remains. Just as in the multimode fibers, different wavelengths of light travel at different speeds causing short pulses of light injected into the fiber to spread as they travel. This phenomenon is called "chromatic dispersion". The amount of pulse spreading depends on the spectral width or number of wavelengths or colors the light source produces. The lasers typically used as light sources for single-mode systems produce a relatively pure light output, with a narrow spectral width, reducing the chromatic dispersion effect in single-mode fibers. Nonetheless, the pulse broadening produced by chromatic dispersion ultimately limits the bandwidth of single-mode systems. Since fiber bandwidth determines the transmission distance capability of high-data-rate systems, several single-mode fiber designs have been developed to optimize this characteristic.

When moderate distance transmission cannot be accomplished with multimode fiber and inexpensive multimode light sources, singlemode fiber is most commonly used in private network, campus, and building applications. It is designed for use at both 1310 nm and at 1550 nm wavelength windows. Because the 1310 nm lasers and detectors are less expensive than 1550 nm devices, most of these short-to-moderate distance applications use the 1310 nm wavelength. Single-mode fiber is the least expensive fiber available and is optimized for the lowest dispersion at 1310 nm. 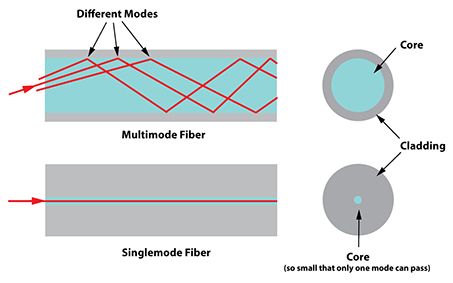 Breaking the Differences Down...

Singlemode fiber's core size is smaller and carries light directly down the fiber (it only allows the fundamental mode of light to transmit down the fiber). As a result, light reflection created during light transmission decreases, lowering attenuation and allowing the signal to successfully travel over longer distances.

Multimode's core size is five to six times larger in diameter than singlemode, which allows for much greater light-gathering capacity and facilitates the use of cheaper electro-optic devices. Multiple modes or light paths travel down the fiber at once, which has traditionally limited transmission distance and bandwidth.

As transceiver prices come down, however, singlemode is starting to be used more often in shorter-distance applications as a cost-effective choice.

In singlemode fiber, all light from a pulse travels at about the same speed and arrives at roughly the same time, eliminating the effects of modal dispersion found in multimode fiber. This supports higher bandwidth levels with less signal loss over longer distances. It's ideal for long-haul signal transmission applications, such as across or between campuses, undersea or in remote offices. There are essentially no distance limitations.

Because multiple modes/light paths travel down a multimode fiber cable, it only offers high bandwidth over a short distance. When run over longer distances, modal dispersion (distortion) becomes an issue. This is typically expressed in a fiber's "effective modal bandwidth" characteristic, which is an inverse relation between fiber bandwidth and reach distance. As signaling bandwidth increases, the reach distance decreases – and vice versa – due to the modal dispersion effect.

For more information regarding DINTEK's extensive range of fiber optic products, click below
or email our sales team at : This email address is being protected from spambots. You need JavaScript enabled to view it.